It’s hard for me to imagine that this was our first trip to the rim this year.  It’s June already, and we just haven’t found time.  Life sometimes just gets away from one.

Unfortunately another deterrent has been that much of ‘our’ rim has been closed due to a local fire…. WAY TOO CLOSE to home.  Only 20 miles away, this one was a scary one.  It was more the area that made it difficult for firefighters.  The rim is very steep with a lot of dead and down, fallen pine needles and thick dry forest due to years of Forest Service policy of no-burning.  This particular steep area can’t be reached by fire fighters, so all they could do was hold it back and try to avert it from cresting over the ridge.

The good news of it is, that it had top priority in the Southwest, which meant that it got all the resources they needed.  Local control was handed over to the Feds, as they brought over 1200 firefighters, helicopters, and planes to douse it out and work the fire lines.  The comforting fact was that they were clearly working it hard… we had regular meetings held locally by the Forest Service to give us status reports and answer any questions we had.   It is now, thankfully, completely under control… and smoke is dissipating.

So we thought we’d make a trip to the rim – at least the outskirts of the area that isn’t closed – to see if we could get some pix.

The animals were out if force, seemingly enjoying the nice day just as we were.

We couldn’t actually get close enough to the fire to see any smoke, other than that on the murky horizon.  But we enjoyed a very pleasant and relaxing day out – and wondered, what has taken us so long? 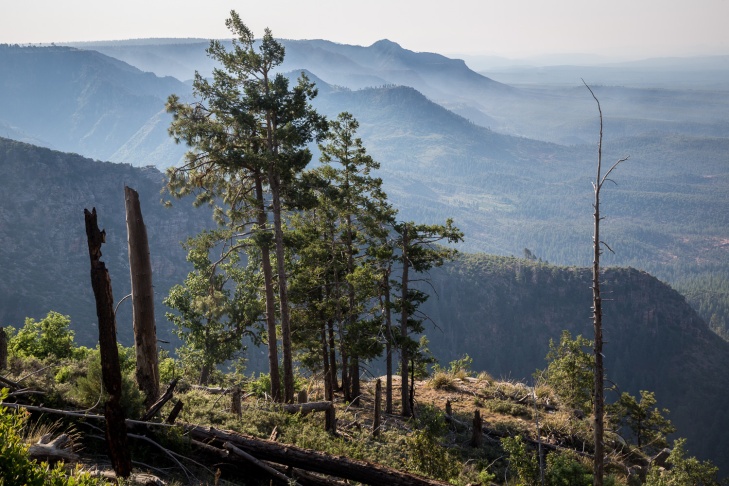