This project has taken a bit of a hold since it has snowed… and with the holidays and such.  We know that since it is cold out we’ll want to let the concrete set up for at least a couple weeks.  So we built the forms, lining them carefully with plastic so that we can easily unmold the insets to embed our tile ornamentation.

We’ve poured a ton of concrete in our lives, but this is a first for us pouring it in the snow.

We put some brown die in the mix with the rock, cement, sand, and water, and mixed it in the cement mixer to a wet but stiff mix.  Then we wheel barreled it into the shop where the forms awaited.  Then we shoveled it in with a scoop.

Now that they are all poured we wait.  We’ll let them dry for a couple weeks, then unmold them and ready them for embedding the tile.

Now that we have the table metal legs and assembly designed, cut, built, assembled,  welded, and ground… whew!  We have moved on to the benches.  We cut the metal legs and the side struts, using the same pre-fab balls in the center that we used in the table (see earlier post, Concrete Table).  We’re welding it all together and putting the top re-bar bars across the assembly so that we can sink it into the concrete.

We made the shape for the bench using an elaborate ‘compass’ of sorts with a router, mirroring the radius of the table.

For the bench form, we are including a recessed band so that we can imbed colorful tiles (we’ll do the same for the table). You gotta have a vision for this sort of project.  I love how it’s coming together.  The finished product should be very cool.  Stay tuned for the next installment. Just as a teaser.. here’s the table and bench skeletons… and the beginnings of the concrete forms. More to come… 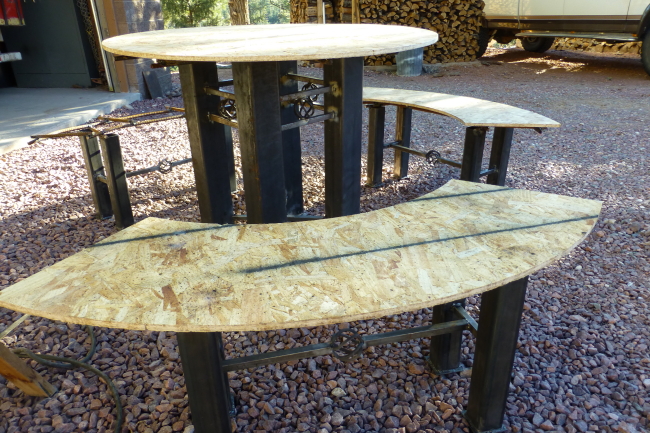 Have you heard of this place?

It’s at the courtesy of rancher and owner, Brantley Baird, an old cowboy and a character himself.  He gives tours of a section of land down a canyon which is littered with Indian petroglyphs.  But before you get there listen to the fabulous stories our host has to offer and the artifacts he has found, collected, and been given in his interesting pioneer museum.  It’s like going into a western cowboy past, filled with stagecoaches, furnishings, cowboy hats, indian pots, and farm equipment.  It’s a historic experience and interesting way to spend the day.

The ranch is located East of Winslow, West of St. Josephs City on a large strip of dirt and dust that is still a sometimes cattle ranch.  Brantley Baird gives tours on request by appointment only. 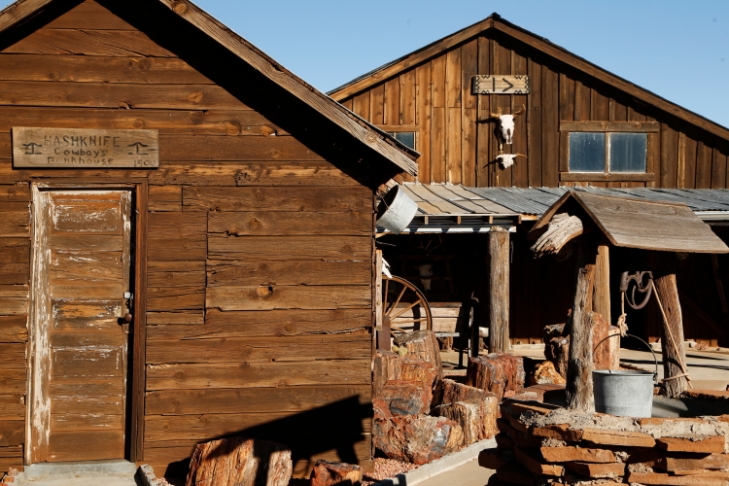 The grounds house several bunkhouses for weddings, overnights, etc., in addition to the museum and the only remaining bunkhouse from the Hashknife Cowboys.  The Hashknife Cowboy outfit were the cowboy who managed the cattle in northern AZ at the turn of the century.  In the day, the government gave the land to the railroads who then sold it to ranchers.  This last remaining bunkhouse is still intact and outfitted with original bunk beds, allowing one a glimpse in cowboy past. 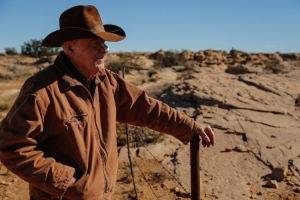 It’s a fascinating tour given by a man meticulous about preserving the past, including the treasure trove of petroglyphs that grace his land and are frequented by University types documenting their findings.

Once the museum tour is done, it’s time to make the trek to the canyon.  There Brant has put quite a bit of time, energy, and money making the decent into the canyon safe via railings and walk ways. 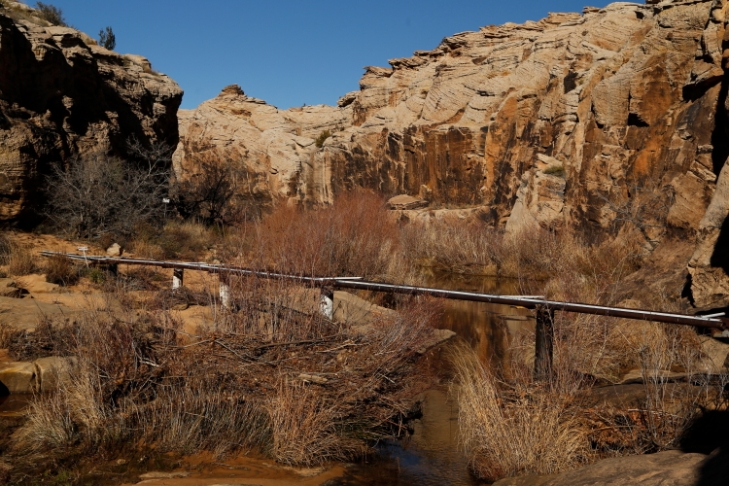 The petroglyphs after you make the decent are everywhere along the walls.  There are pictographs of families, animals, and symbols.  It’s a fascinating display. 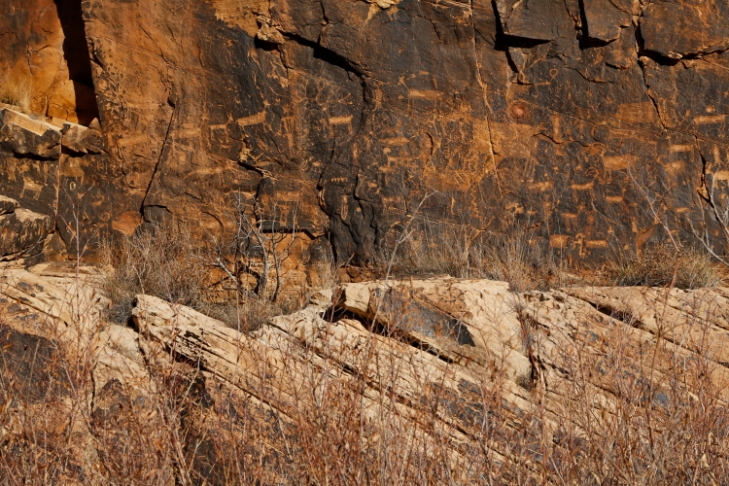 Check out more pix on kritterspix.com.

Last year we found ourselves in San Diego in December for a photography class. We loved the lights and decorations that were magical this time a year. They put us in the spirit and mood for the upcoming holiday celebrations. So this year we thought we’d give ourselves that treat again, and what better place than Las Vegas, NV. So many people noticeably grimace when we tell them we are going to Vegas. They just don’t see the allure that we do. Their common reaction is… we don’t gamble. Well, we don’t either. That’s not what we go for. The rooms are invariably cheap ($25 at Excalibur + $25 room fee), and the dinners range the gammit of what you want.. and want to pay.   We do enjoy the fancy restaurant experiences. Where else can you get all the French masters in one place… Daniel Boulud, Michel Richard, Alain Ducasse, Pierre Gagnaire, and Joel Robuchon, not to mention the American celebrity chefs like Mario Batali, Tom Colocchio, Bobby Flay, and Guy Fieri… still only naming a few? Undoubtedly Vegas restaurants are ghastly expensive… but these kind of masters aren’t cheap, anywhere. And they all have something we can learn from and get to take home, whether it’s the freshness or preparation, the courses or the presentations. It’s an experience we enjoy more than the cost of a show. We love to walk around and enjoy the over the top rotating decorations and the photography fodor it offers.

We were anxious to see what Vegas had to offer for Christmas. They always have the changing decorations at Bellagio and Aria… but surely for the holiday they would be over the top Vegas style. Not! We were seriously disappointed. The decorations were as expected at Bellagio, fantastic and wonderful, but also predictable. Aria, instead of some eclectic oddity, had a simple Christmas tree. There were very little, if any, exterior decorations throughout Vegas. I guess the lights that Vegas holds are glittery enough. Hmmmph.

We did enjoy wandering the strip as usual.  We had some nice dinners (see my restaurant reviews on my krittersmenu.com blog).  But next time we’ll try someplace else for Xmas decorations and lights.

Just to give you an idea of the kind of site you stumbled across… this is the sort of maniacal stuff we’re liable to do.  And I don’t mean stunt jumps or Joey Chestnut eating contests.  I mean hard work, from scratch, stuff most people buy.  But no… not us.

We are doing outdoor landscaping, and decided we need a nice concrete table.  You know, one of those cement table you see in Mexico, with the mosaic tile tops and the concrete benches.  We figure the concrete will be impervious to our snow and heat here in Northern AZ.

So we designed our own.  Not that we have ever actually made a concrete table.  How hard can it be?

We cut the legs out of 4″x 4″ square channel.  We figure the base should be metal so that we don’t have to worry about future maintenance. 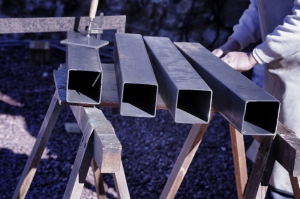 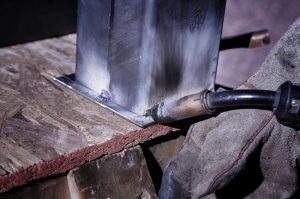 Then we weld a foot plate onto the bottom of each leg.

Then cut side bars to go between the legs, and weld them in place with an ornamental ball in the center.

Better than a soap opera, huh?!  Can hardly wait for the next installment, right?

I guess it’s a sure sign of retirement… I’m now making gourds!

I took a class from Nora Graf of mesquitegourds.com, a true craftswoman.  It’s her fault!  She gave me the bug.  I enjoyed her class so much, I bought a few gourds… cleaned them, outside and in, and found myself with 3 dimensional blank canvas’.

I’ve found this ‘craft’ a very creative outlet… the possibilities are endless.  What fun!

Have you heard of the Harvey Girls? 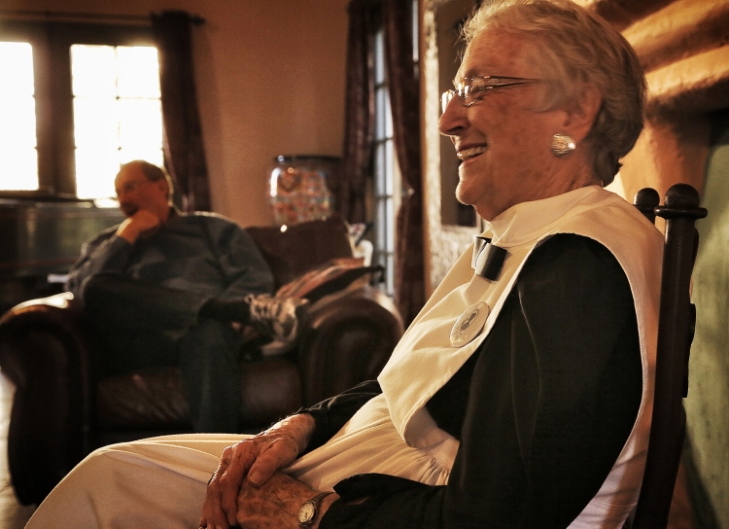 They are a part of our history.  Back in the late 1800’s when the railroads were growing and people from the East coast were moving West, train stops were pretty rough and uninviting.  Good food was literally road kill, or re-cycled stews (if you didn’t eat it, it went back in the pot).  Fred Harvey had a better idea.  With the railroads help, he built ‘Harvey Houses’ along the railway.  Harvey Houses were at rail stops along the way offering places to stay and decent food with actual linen napkins and white tablecloths.  Men proved unreliable to come to work at the Harvey Houses.  They would get in brawls or liquored up.  So the idea of using women (unheard of in the day) to serve the guests was born, and they were dubbed the Harvey Girls. La Posada, in Winslow, AZ, was an original Harvey House built in 1930. It sits as a train depot for the now BSF train.  It has been refurbished and today operates as a first rate restaurant, hotel, and living museum.  We took the opportunity partake in a unique opportunity and take a Harvey Girls tour.

The Harvey Girls is a group of volunteers committed to preserving the history of La Posada, Fred Harvey, Mary Colter, and the Harvey Girls. 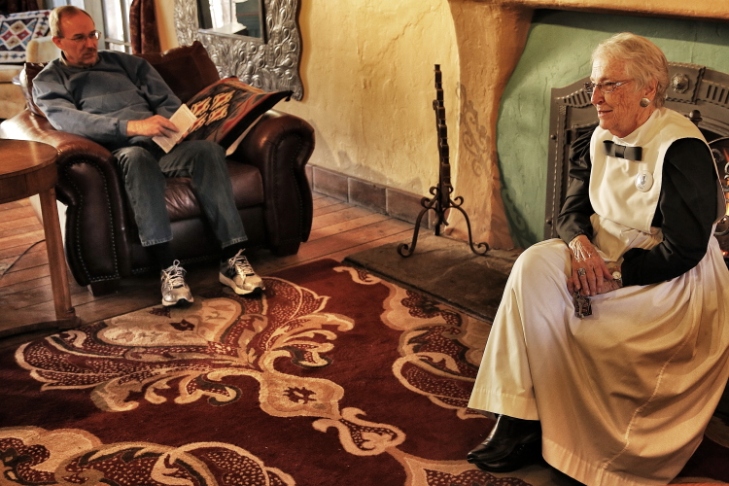 Marie, our host, was the daughter of a Harvey Girl, and an entertaining story teller for our fascinating and informative tour.  Not only did we learn more about Harvey Girls and their history than we had previously known… but also got to see a lot of the architectural details of La Posada that we would not have otherwise had the opportunity.  If you’re ever in Winslow… call ahead.  Make an appointment for a Harvey Girls tour… and stay for a historic tour and a fine meal. 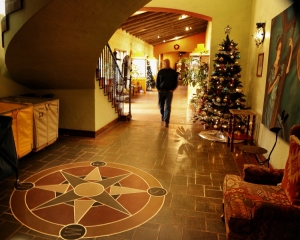 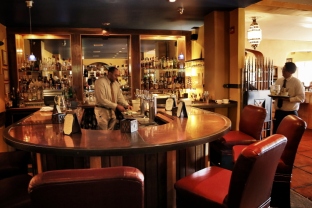