It started small… only 10 acres when we first saw it.  (These photos are ALL taken off our balcony.)  The Tinder Fire was 2-1/2 miles from us at Kinder Crossing.  We figured the Forest Service would put it out, and that would be that.  That was Friday.

But it continued to grow… and fast.  By Saturday it was 500 acres and we were given pre-evacuation notices.  They were just being cautious… right?!  We just lost our truck and camper to a fire a mere 8 months ago.  We just finished settling with the insurance company.  There is just no way we could lose our home to a fire…. right?! 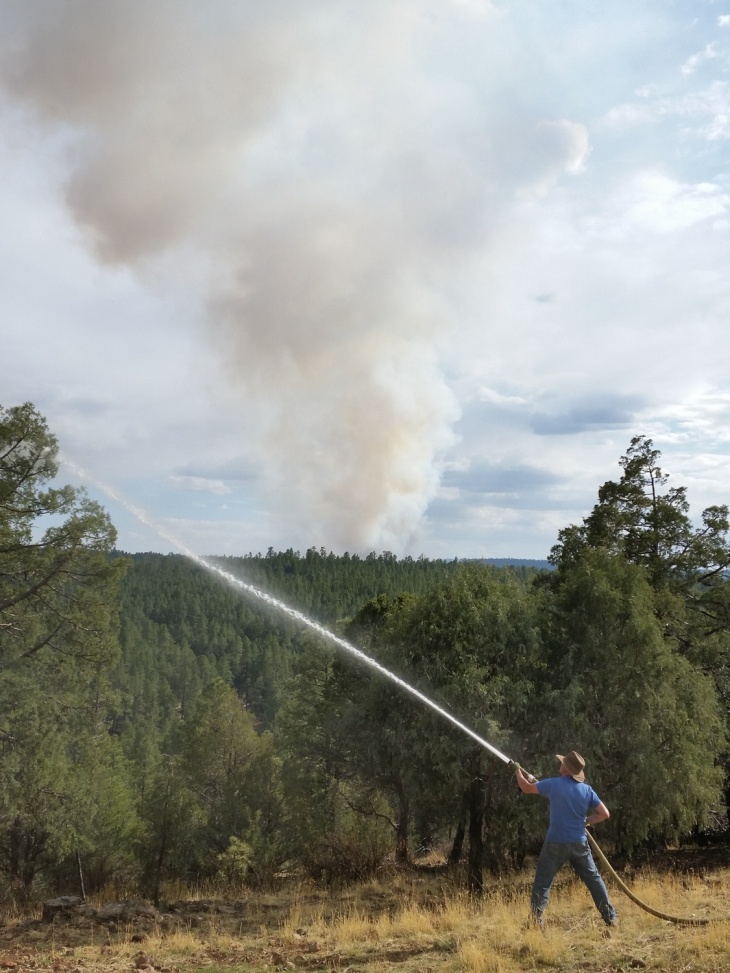 We sprayed water on our trees from a hydrant we had put in months before, and hose lines John had procured … just in case (thank god).

It didn’t slow down.  It grew.  By Sunday it had jumped the lines and was headed toward us.    Our house is our masterpiece… we have made every piece of furniture in it, all the art… and the house itself.  This can’t be real.

At noon the Sheriff knocked on the door and said we had to evacuate….  thank you, no thank you.  We’ll stay.

This beast was coming, and there was no stopping it.  It looked like it was going to go around us and head east with the winds.  But then it caught an ill wind and was headed straight for us. 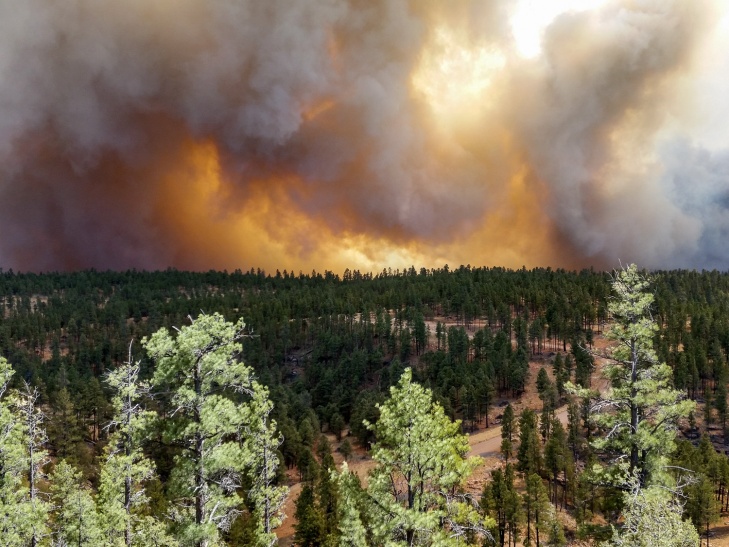 There were Hot Shots at the bottom of our hill trying to keep it from coming up our hill and into our subdivision.  John was at the top, using sprinklers supplied by our insurance company fed by water out of an inflatable swimming pool, to douse our trees.  He had two hose lines attached to the fire hydrant to squirt water on the trees and on our neighbors to create a microclimate so the fire would divert.

It was here.  It was the scariest thing I’ve ever seen, and I have never been so sick to my stomach.  It was awful.  We were in the middle of it with fire, glow, and smoke all around us.   Flames licking up the trees, moving so fast in these ferocious winds.  It was coming at us from two different directions… from the bottom of our hill and flanking us from across the East side.  John was stomping out flames with his boots in our neighbors yard.  The HotShots came to help and dug a line to keep the fire from crossing over from the East, while they were still working the bottom of our hill.

By 4am it had caught new fuel and was making the movement again toward us.  John was out of water.  He didn’t think he could hold the line.  Thankfully, our fire dept sent 500 gallons to refill our pool so we could activate the sprinklers again.

We were lucky.  We were spared.

In our subdivision of 60 built homes, we lost 4 homes.  The next subdivision up, lost about 30 homes.  It’s still an active fire, 0% contained, and at 11,000 acres as I type.  There is an awful chance that it could move into the next subdivision, but we are hoping not.  They are working it hard to control this unpredictable beast.

I cannot express my gratitude and joy over being spared.  Tears well up as I even think about the prospect.

John worked hard and we were able to save our home.  Firefighters across the country rallied around in droves as Coconino County was declared a state of emergency to help us save our homes.  Our own Blue Ridge Fire Department were putting out imminent fires and saving homes right and left.  Some areas are more devastated than others.  It was the worst thing I have ever been through.. but thank god we lived to tell about it – no injuries reported at all – and we have homes to go home to. Unfotunately. some weren’t so lucky. My hearts goes out to them. It is so awful fine people lost their beautiful homes.

For now, we are still here, our subdivision is largely intact.  We are ecstatic.  The roads on 87 are still closed NB and SB, and all the subdivisions have sheriff’s posted at the entrance to them.  If we were to leave, we wouldn’t be allowed  back in.  Having said that, John went to work (the Firehouse) to see what he could do, now that we are safe.

We have no power, but have a generator (thank goodness, as it operated the pumps for the water sprinklers).  It’s a smallish generator (we are lucky to have it, thanks to a neighbor), so we have no heat, hot water or appliances.  But we’re grateful to be here and in our home.

Spot fires continue, but we have a good vantage point, and John is watching them.

The fire crews have moved on to try to stop the growth, so John just went out to check on a spot fire across the way.  i think I’ll keep him!!!!

Ironically, for being a wannabe photographer, all these pics were taken with my cell phone.  I packed my camera gear, just in case.. and never even thought to dig it out and take a real photo.  We were a little busy.

To the (potential alleged)  firebug who started this… may you burn in hell.