Having lived in the Valley for years, we certainly had ample opportunity to visit any number of the many ‘attractions’ that Phoenix offered. Working and traveling for a living, many came to wait until after we retired, such as the Mystery Castle.

The Mystery Castle is known for being this eclectic ‘castle’ on the top of the hill, just below the popular hiking trails at South Mountain Park in south Phoenix. We only knew that it was made up of common items and a bit ramshackle, but never knew its story. For our $10 admission we were given the Tour of the 8000 sq ft ‘mansion’, with 18 separate rooms, 13 fireplaces, and a myriad of interesting details. 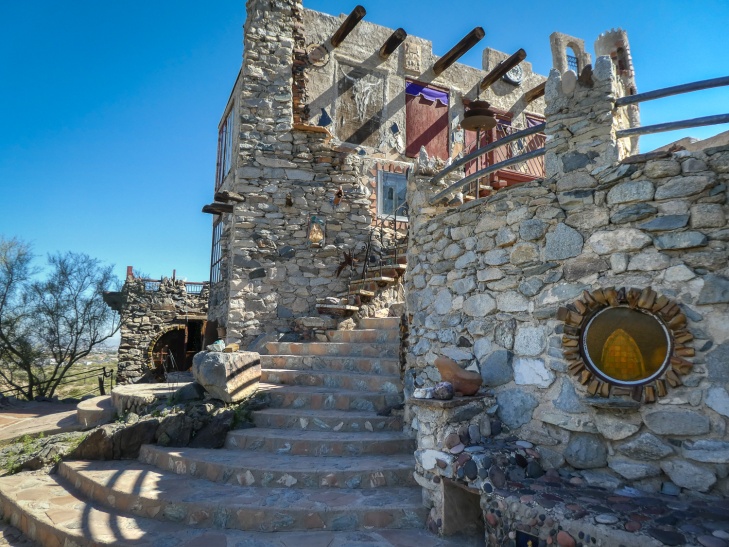 It was built by a man by the name of Boyce Luther Gulley, who left his wife and child and escaped Seattle, WA to a life of isolation with the very contagious and deadly disease of tuberculosis. He moved to AZ to find a warmer climate to live out his final days in 1930. He lived much longer than anyone expected, and over the 15 years between 1930 and 1945, when he died, he built this monstrosity of a house. 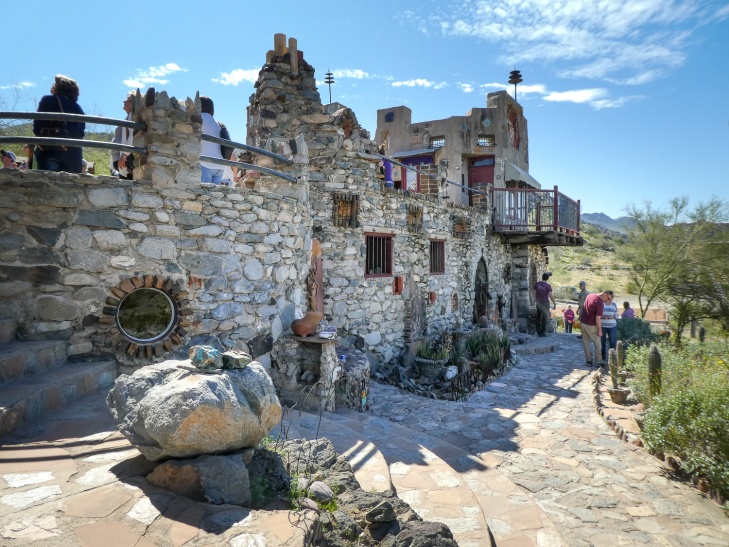 He staked claim to presumably dig for gold at the base of South Mountain. He had amassed 40 acres of land through his claim and the little gold he did find. He likely built the house to establish living quarters, and perhaps a place for his family to live after he had gone. Not having much money, all the materials were found and procured, such as the many slump bricks that with ‘mistakes’ in the firing process (now expensive oddities and rare treasures).

As he continued to survive, he continued to build in a run-on and ramshackle manner with inventive flourishes throughout. He added on a large great room, fireplaces, and flagstone floor. His big expenses were concrete and food. Most of the stones came from the surrounding land, and decorative pebbles throughout the flooring from the nearby Salt River.

Archways and circular windows with old thrown away pressed glass containers (early versions of Tupperware) as glass blocks and sky lights. Having no electricity or running water, he added holes in the ceiling for ventilation and light. Later he added a guest room, a little girls room for his young daughter, and later a bar and chapel. Eighteen rooms in all, most with fireplaces to warm the cool winter evenings. He built paved pathways, breeze ways and roof top patios, all with little to no education, power tools (or power), water, or assistance. 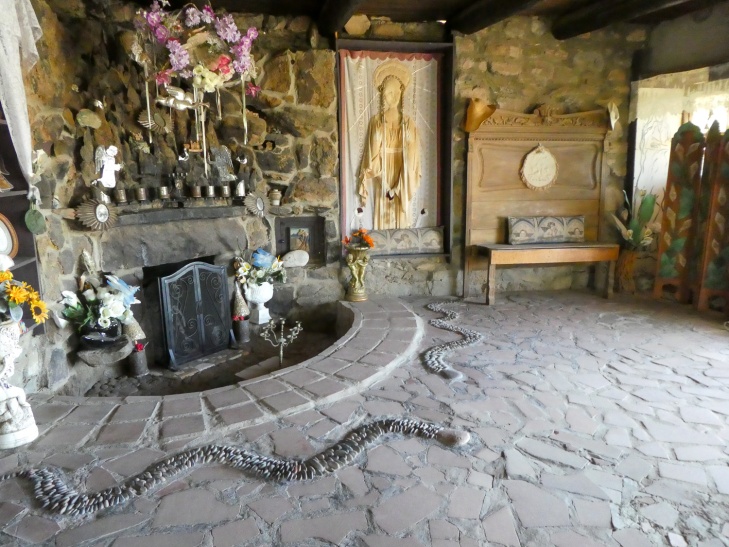 Feature shelves jut out randomly and selectively from its breezeway walls for knickknacks and special decorative treasures. Benches built into the walls were convenient for sitting, reflecting, and rests through the day. Arches and pillars lead one from the main house area to the auxiliary bedrooms for his daughter. Pebble snakes embed the floors as a sign of good luck and virility.   I couldn’t help think that he was like an unknown Frank Lloyd Wright with great design ideas, architectural details, and well thought out features, but without the entourage, money, and fame of the arrogant FLW.

His family finally came to see him just in the months before he died in 1945. His wife Nell and now 20-year-old daughter Mary Lou lived out their lives there. They found that people would pay to see the house and in 1948 began giving tours, which have continued since. The daughter Mary Lou died in 2010. She set up a Foundation to take care of the house and her father’s legacy and continue the tours into the future. 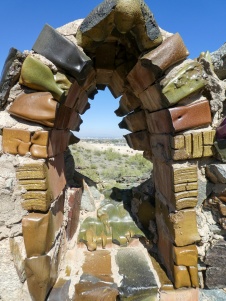 It was a fascinating look into the tenacity of a man, desperate to leave something for his family. In the end he left much more. The innovativeness of what the human soul can create with limited resources and shear will is on display at the Mystery Castle. While the finish work is rough and amenities slim, the workmanship and work effort are awe-inspiring.   It was fascinating a tour and an enjoyable way to spend the afternoon.